Is Hyperinflation Their Economic End Game?

Are We Headed To A Zimbabwe Venezuela Type Hyperinflation In The United States?

George Gammon
Hyperinflation could collapse the economy 👉 AND STEAL YOUR PURCHASING POWER! 👈 But if you understand how it might happen you take steps now to make sure you’re prepared. Even it never happens there’s no downside to having a PLAN B. The main problem is the government has over 26 trillion in debt, and that’s just the on balance sheet debt. Total the debt is closer to 100+ trillion and the only real way out of the problem is for them and/or the Federal Reserve to create massive amounts of inflation, if not hyperinflation. Although many people have talked about hyperinflation through Fed money printing they don’t fully understand how the plumbing of the system works and how it’s almost impossible for the Fed to create hyperinflation by themselves. BUT no one is taking about the Fed creating their own digital currency, the government banning cash as a way to increase the money supply even more and increase velocity giving them the inflation or hyperinflation they need to bail themselves out of the worlds largest debt problem. In this hyperinflation video I discuss the following: 1. Why the only “solution” is inflation. 2. Currently why that’s difficult to achieve to the extent it’s needed. 3. The possible END GAME no one is talking about!

Is Hyperinflation Their Economic End Game? 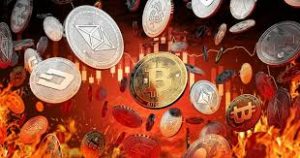